Deal seekers and Delta travelers listen up! The airline and LivingSocial are teaming up to offer destination-specific deals  based on a traveler’s itinerary.  Great way to discover new attractions, stores and restaurants in a new city and saving some coin as well! An interesting and relevant collaboration.

In another example of marriage between technology and hospitality, Google is conducting an experiment with a hotel search tool. Currently only available in the United States, users can search, save and book rooms. Check it out while planning your next trip!

With new mobile devices being introduced every day, it does make you wonder: which age groups are adopting them? Well, it depends on the device, according to a report by media research firm Affinity. The findings reveal that baby boomers are adopting eReaders, tablets are being gobbled up by Generation X and smartphones are for the Millennial Generation.  As you consider targeted mobile campaigns, consider your audience and the appropriate channel.

Imagine having 20 million of anything in your first month of existing. Google+ has apparently surpassed this milestone in number of users.  What are your initial thoughts on the network?

Do you ever wonder what it would be like to work at Facebook? Check out after-hours pictures of the offices.  Although these are quite spooky at night, I can imagine a bustling bright space during work hours. 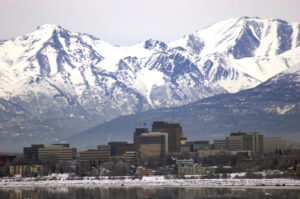 The Huffington Post reported on the least social cities in the country, including Anchorage, Alaska

The Huffington Post reported on the least social cities in the country, per database company NetProspex.  An eclectic mix of places whose citizens have the lowest social media adoption, makes up the top five: Anchorage, Alaska; Albuquerque, New Mexico;  Wichita, Kansas; Baton Rouge, Louisiana; and Ontario, California. If you live in one of these areas, how can you make it more digitally social?

I think this site may be going places…Luminate turns static pictures on the Internet into “ones with tabs for annotation and shopping information, and offers a way to share all or parts of an image on Facebook and Twitter as well as make comments,” reports USA Today. The site, which used to be known as Pixazza, makes it easy for web users to find out what retailers are selling the clothing their favorite celebrities are wearing in a picture, among other things, at an instant. One to keep an eye on for sure!