As the Economy Tightens, Don’t Lose Focus on Ethics

As an industry, we are all suffering right now in large part because too many people over a long period of time checked their ethical compasses at the door.  Whether we like it or not, we are all caught up in this mess and few people are differentiating the players – since we are part of the system, we are perceived by many as therefore being part of the problem.

Do you have well-stated ethical guidelines?  Are people aware of your policies?  Do your outward actions reflect your inner values?  Do you ever allow your ethics to be compromised?

In times like these, people will gravitate to those they can trust.  Your clients, your agents, and your employees are looking to you for ethical leadership.  Be sure you hold yourself up to the highest standards each and every day; you will never regret it.

Within this discussion of ethics needs to come mention of fraud and the possibility that someone in your organization may not be acting as ethically as you would expect. Although it is an unpleasant subject for most brokers, it is an unfortunate fact that theft and fraud happen, even to the many small businesses in real estate (in fact, many studies would suggest small businesses are more susceptible to fraud due to the fact that most lack systemic controls).

How can you tell if you’re susceptible to this?  There is a theory to help explain why people commit fraud that was developed fifty years ago by the late Dr. Donald Cressey, a criminologist.  In what he dubbed the “Fraud Triangle,” he believed that three elements must always be present for an individual to commit fraud:  pressure, opportunity, and rationalization. 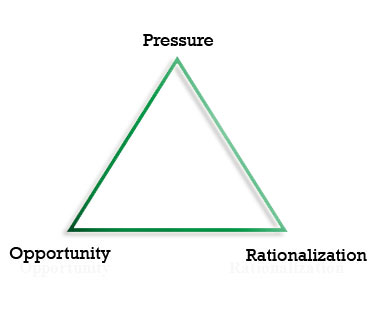 Pressure most often comes from financial strain, which clearly there is a lot of for many people right now.  An individual under pressure may then be tempted to exploit an opportunity to defraud the company if they see a weakness in the operational controls and believe they won’t get caught.  Finally, most people must have some kind of rationalization to go through with it.

Think carefully about each of the three legs of the triangle in terms of your company.

This shouldn’t be a witch hunt.  Nobody wants to keep a suspicious eye on all their people and, if the data is right, the vast majority of companies don’t have a problem.  However, think of it like insurance: just because the chance of something bad happening is low, should that stop you from taking reasonable, preventive steps (especially when the costs could be tens of thousands, if not hundreds, of dollars)?

Be aware of those who may be under extraordinary strain and who may have a reason to rationalize fraud against you.  Above all, take steps to shore up any gaps in your controls.

The best of the best has been announced! 2022 REAL Trends America’s Best Real Estate Professionals ranks the

You’ve Got the Power! How Agents Can Stop Discrimination in the Housing Market

Diversity and inclusion apply to the housing market as well as business. The two come