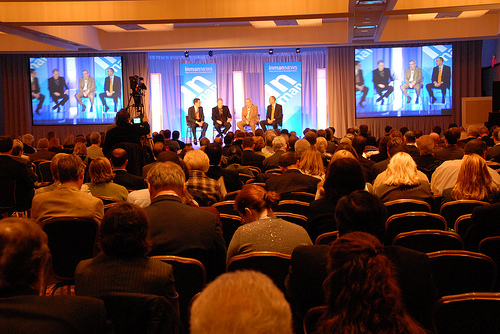 Once in a lifetime, or maybe twice if one is lucky, opportunities will align and allow certain people  or groups of people to have a profound influence on the masses. It has been said that luck is a form of intelligence that provides one the ability to recognize an opportunity and act on it.

Malcolm Gladwell speaks to this in his new book, The Outliers.

Much has been written this past week by fellow bloggers offering their unique perspectives and  takeaways from the Inman Real Estate Connect Conference in NYC last week. Many good observations and tips, many, many pictures and links on Facebook and Twitter.

I saw something different last week at the conference

If you were there, perhaps you caught a glimpse of it too. The word acceptance comes to mind. Acceptance of the current economic situation and its realistic effect on real estate. It replaced denial. And the unyielding desire many in real estate have to spin the positive at all cost.

We all listened in stunned silence to Professor Robert Shiller talk about the collapse of the housing market. We listened to the economic expert panel give us the straight goods on how high the unemployment numbers will rise. And how long this recession could very well last. Throughout the room and the conference, a quiet whisper of acceptance could be heard and felt throughout. It was good. It was real. I think people are simply done with all the false bravdo. And the shoveling of bad news under the rug.

A brave new world for real estate is upon us.

In the ensuing days of the conference and post event as well, conversation held a certain air of humility. Perhaps it was the international flavor of Connect combined with the times but a realization that we all need each other seemed overtly clear. Nobody should have to do it alone. And no one has too. We all need and can greatly benefit from each other’s support, ideas, products and services. We are all part of a great group of people who truly want each other to succeed because that supports our own success.

I also witnessed a profound understanding and acceptance that our business needs to change as we move forward. That will beget a willingness to make change happen. And a tipping point of change is on the horizon.

If day one of the conference could be called “reality check”, day two should be called “identifying solutions”.  Gary Vaynerchuk electrified the audience. It was a shock treatment; one that we all needed. Later that day I looked him up on Twitter and noticed he had almost 30,000 followers. That tells me something. It speaks volumes about the power of social media. Networking. And the opportunity to broadcast too and influence the collective. Huge.

Later in the afternoon, a filled to capacity room of brokers tackled the burning issues and risks of owning a brokerage company. They openly shared everything. Refreshing. The power of a team.

I started thinking about a time many years ago. 1991 to be exact. It was during the last Canadian recession. The challenges were huge. I was managing a small real estate office and I saw an opportunity to grow. Agents wanted to join my office, but there was no more space. I went to my broker and  asked if we could move to a new location.  There was space across the street that allowed us to double our occupancy. I was told that until I double our agent count, that would not be an option.

They were not prepared to take the risk. Or perhaps they thought I would simply abandon the idea and they could save a few dollars. They were wrong.

Back at the office I called a sales meeting. I asked the agents for help, ideas, anything that could overcome this challenge. A hand raised. It belonged to the Top Producer in the group. She suggested we all share our desks with one agent, conserve space and make doubling our size possible. Everyone agreed. This was well before any notion of virtual offices or hoteling was even in the air.

I went on a recruiting rampage. Thirty days later, we doubled. By the time we completed our move we tripled in size and were forced to take extra space. Within a year we were 4x our original size.

That was then. One of many times during my career when I witnessed the power of the collective in action and the results that follow. The feeling you get as a result, is something, you never forget.

Which is why I recognized it last week. It was familiar indeed. And it was good. Especially in the wake of such sobering news.

A huge opportunity has presented itself to real estate. 1000 folks caught wind of it in NYC. It is said, if an idea can attach itself to 1000 people, it could take over the world. All we need it to do is take over an industry.

Many left NYC ready to take 09 by the horns. They are stepping forward. Accepting the challenge. Prepared to make significant changes in our business.