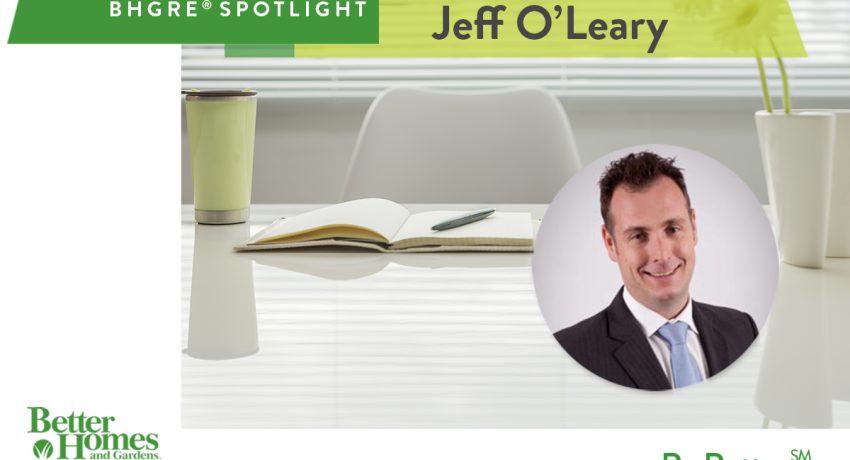 The road to success isn’t always paved for you, but that’s not something you’ll have to tell Better Homes and Gardens Real Estate Signature Service top producer and agent Jeff O’Leary. Jeff has made quite the name for himself in the industry – in fact, he’s made two, as he’s also known as the “Village Guru.” I was more than excited to sit down with Jeff recently and discuss his rise to the top, his outstanding web presence, and the BHGRE value he refers to as both his business and personal philosophy.

It’s difficult to believe now, but the launch into real estate was a rocky one for Jeff, who fulfilled only one transaction in his first year. Jeff realized quickly that if he was going to be successful, he was going to have to set himself apart from the crowd. Though he avoided the downturn of the American market, Jeff faced several obstacles in a strong Canadian market that was growing to be more and more competitive. Jeff spent the first year of his career using methods that most new agents choose: cold-calling and knocking on doors, making any connection that could help him build his reputation. But Jeff wasn’t seeing the results he wanted, and he soon recognized the limitations of his marketing strategy. He made a decision then that would change his career, and ultimately place him in the forefront of real estate.

Jeff kicked off his second year determined to be better. He created his marketing plan, and hit the ground running. Jeff started by developing his website and curating content that would last, or “evergreen” content, based on knowledge, advice, and insights. He turned his listings into blog posts, expecting online searches of his name to lead back to his website. Jeff was planting seeds for a fruitful future, and he was planting them in the digital realm. This foresight to construct a web presence has lead Jeff to manage one of the most involved, and recognizable, marketing plans in the BHGRE network. Sooner than later, the plan began working, and the phone calls started pouring in.

From there, his web presence and digital footprint only grew, as referrals and repeat clients multiplied. Jeff was quick to take advantage of his recognition, and began allocating funds specifically to digital marketing. He began researching not only the real estate aspect of his communities, but the lifestyles as well. Taking this knowledge, a little creativity, and a lot of personality, he filmed and published videos on a regular basis. Over time, his presence grew to be so successful that he was effectively known as the “Village Guru,” able to inform clients and potential clients of various lifestyles and community information not found elsewhere. Through the power of video, Jeff amplified his web presence and became a resource for clients, recognizing the accessibility of online marketing. He set himself apart from the pack with ingenuity, innovation, authenticity, and communication.

“I wouldn’t do anything unless I thought I could be the best at it.”

Often focusing on frequently asked questions, real estate hot topics, or tips and advice, Jeff has constructed a differentiator that is not only unique but also vastly powerful. Recognizing the limitation of print media, Jeff has sworn off traditional marketing, only using flyers locally and with the intention to direct homeowners back to a landing page. It can be said that for Jeff’s business, all roads lead back to the Internet.

“95% of [people] are not ready, so you want to get them to a place where they can get more information. Because once the time is right, then they’re going to call you.”

Jeff found his niche and business style thanks to a thorough, dedicated, and pioneering marketing plan. With just a few years of experience under his belt, a long list of achievements, profitable numbers, and a distinct web presence, it’s clear that Jeff has more than excelled at personal branding. And what philosophy does Jeff credit as the foundation of his powerful, successful career? “Be authentic.”